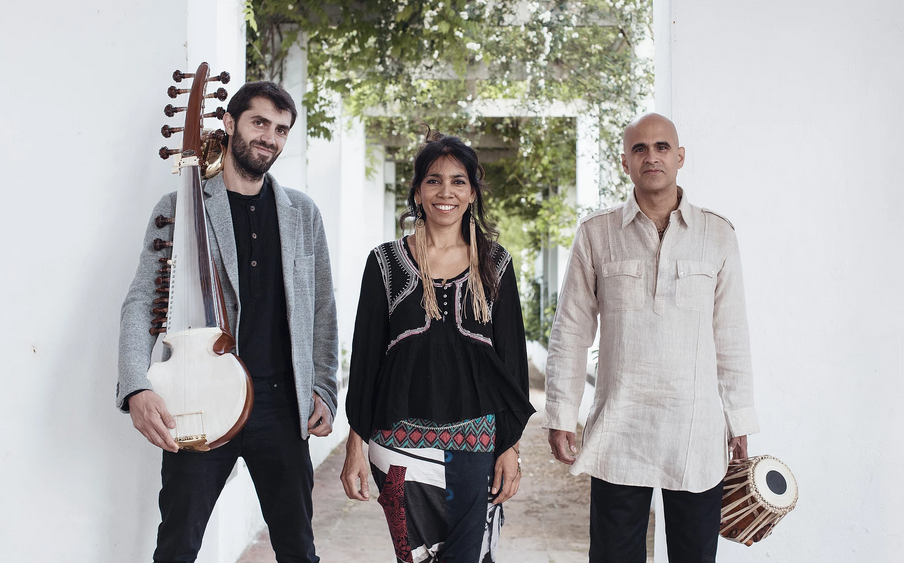 Raul Sengupta
the son of a German ballet dancer and an Indian engineer, was born in Hannover, Germany. Growing up in an atmosphere of joyous fusion, listening to Bengali Songs and Western Music, indulging in rassagolla and chocolate in the embrace of Tagore and Tchaikovsky, he discovered his love for music at the age of 6. The quest for a musical identity mirroring his own cultural journey, started with drums/kit at the Academy of Music in Germany, leading him down a varied and multicultural path encompassing the various percussive traditions of Africa, Latin America and the Orient, finally returning to his Indian roots in Kolkata, where he studied Tabla under the guidance of Maestro Shankar Ghosh..... Raul has developed a melodious and fiery style of improvisation with his personal sound, in a set which combines both percussive and drum/kit techniques. His passion for grooves allows him to lend texture and support to a wide variety of musicians, dancers and projects of different musical synergies..... Raul has performed and recorded with Prem Joshua, Nicolas Simion, Piirpauke, Ashraf Sharif Khan, Antonio Andrade, George Bishop, Mahmood Sabri, Mahesh Vinayakram, Exhausted Groove Orchestra, Nassir Shamma, Renato Rozic, Amridan, Nakissa, José Parrondo, amongst others... in Europe, Asia, the US, South America, Egypt, and Mexico...

Hina Sarojini
is a believer in the power of life and its natural luxuries and has studied many styles of dance, music and healing therapies and meditation techniques over the years. A wanderer by nature, she travels all over the world sharing her learning, art and love. Born in Singapore to a family of dancers and with a master musician as a father, she has studied Indian classical dance forms since the early age of 4. By 6 years of age she had already performed on Asian TV, later becoming part of the dance ensemble of the renowned "Temple of Fine Arts" in Kuala Lumpur and Singapore. Over the years she has choreographed many dance performances and given dance workshops in India, Europe and the USA with Indian/Fusion bands such as: Prem Joshua, Amridan, Calcutta Special Project, and an Indian/Flamenco Band with Antonio & Ursula Andrade, Ashraf Sharif Khan amongst others. Now based in Europe she has expanded her creative expression by introducing Modern and African dance elements to her performances. Here are some of the different festivals and venues Hina has performed: “Tajin Festival” (Mexico 2009) • “International Dance Theatre Festival” Austria, 2008; “Isha foundation” Coimbatore, (India 2007); •“Wesak Festival” (Germany 2006); • MTV Bombay (India 2005) • “Namaste”, las Dalias, Ibiza (Spain 2004) • “Rainbow Spirit Festival” (Germany 2003) • “Renudo Festival” (Italy) • Royal Theatre Tampa (USA) • Nagoya (Japan) • Bayerischer Hof Munich (Germany) • Radio Television Singapore.

Jordi Prats
is a sarod player in the North Indian classical music style. Since 2006 he has been the disciple of Pandit Shib Das Chakraborty. Jordi has performed with renowned artists like Indradeep Ghosh, Arup Sen Gupta, Amit Mishra, Efrén López, Gad Tidhar, Avshalom Farjun, Sougata Roy Chowdhury amongst others…
Originally from Barcelona, now he divides his time between India and Europe, studying and performing in India and different countries as: Spain, France, Germany, Switzerland, Israel, Algeria, Austria,etc.
He is the head of music department at Güngur Arts Barcelona (www.gungur.com/en), an association with headquarters in Barcelona and Buenos Aires, with the aim of promoting different forms ofclassical arts of India and the Middle East.
Jordi plays in the Senia Maihar Gharana style which favours melodic beauty and is famous for long sections of improvisation, developing a dialogue with the tabla player and gradually building in speed to a mindblowing crescendo, a hypnotic and enchanting experience.